How to Split a County or ZIP Code Territory in Map Business Online?

On occasion, Map Business Online customers may develop a need to split a territory. This could occur because of an excessive customer density within a small area – like a ZIP code.  Too many customers in a focused area sometimes drives a need to divide a ZIP code or county customer list between one or more sales reps or clinicians. Splitting territory units occurs more commonly in urban areas where territories are based on ZIP codes or Census Tracts, then in rural areas.

Another reason for splitting territories could be geography. A bridge, a mountain, a highway or a river could turn a few close-by customers, as the crow fries, into an all-day affair due to driving patterns.

A third reason customers split territories is a difficult one for us to accept, but it still happens: Because they’ve always done it this way. At some point in the early 20th century, Grandpa Zaputa started building territories based on tree stumps and large boulders. “It’s how we’ve always done it.” Ah, OK.

Because territories in Map Business Online are usually based on a specific map layer made up of a unique geography segment, the need to split a territory requires some creativity. Typically, business mapping users base their territories on counties or ZIP codes. But territory base layer options include state, county, ZIP-5, ZIP-3, city limits, Census Tracts, and even school districts.

We highly recommend sticking with one-layer based territories because this allows the full benefit of database management and analysis:

Still, some customers prefer to create territories that are split between map layers and if that is your case this is how you do it.

For example.  A company has based a series of territories on counties. They then decided they needed to split a county-based territory into one full county and a half of another county. The ZIP code layer is turned on and the original territory area would be queried for ZIP codes and resaved as a ZIP code territory.  Holding down the shift key, the business map user could select as many ZIP codes in the second county area as necessary, to complete the now county-split territory based on Zip codes.

If more granularity is required for the selected area, consider using Census Tracts as the geographic base of the new territory instead of ZIP codes.  Census Tracts work well for inner city coverage analysis.

A user could always use a polygon search tool to generate the overall territory boundary map object and then query the ZIP code layer from that polygon.

Remember when the new territory is created to delete the old one.

Create a Region out of Two or More Territories

This solution to the problem of split territories is achieved by creating a Region out of two or more territories. Using the same example as above, the map user would leave the original territory in place. Then they would create a new territory, covering the county section based on ZIP codes using a polygon tool, querying the ZIP codes and naming the additional territory section. The new territory section would be saved as a territory name and would be in the territory layer.

Next, the user can use a polygon search tool to select both the existing county-based territory and the new ZIP-code based territory and name it as a Region.  Now the Map & Data box will display a region layer in addition to a territory layer. In this territory map, Regions will indicate split territories across counties.

In the Region case, do not delete the old territory because that is used to build the region. 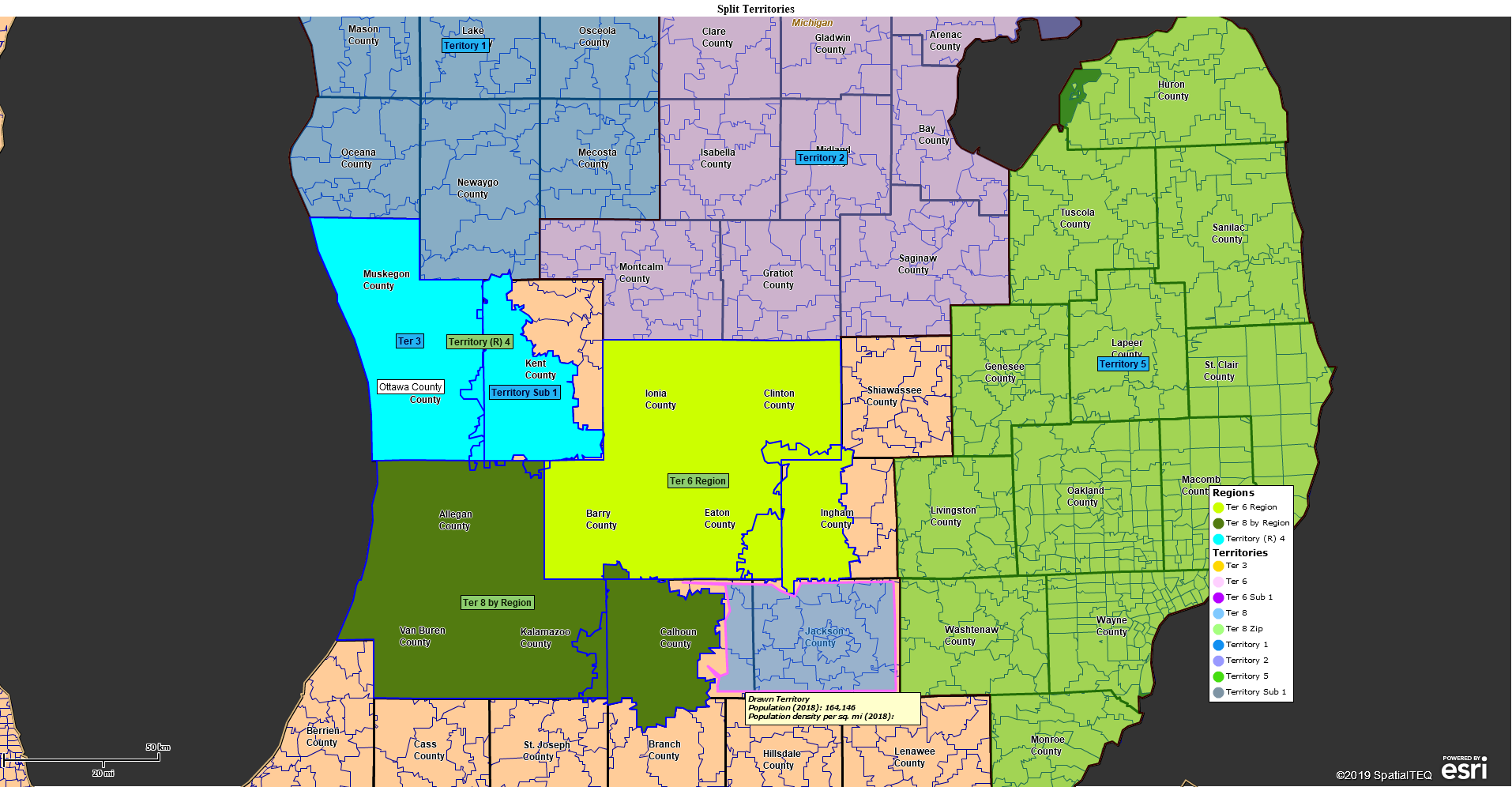 Finally, the map user always has the option of simply creating territories as drawn map objects a shape on the map unconnected to a map layer.  For this approach to territory creation, use the Map Business Online draw tools.  The drawn circle, polygon, or free form object will be labeled, and the color filled in.  When you choose the path of drawn objects you lose access to the Data Window’s More Data tool. You can still compile data associated with your drawn territory, but you’ll just have to use the summary button.

The summary button is found in the Map Objects mini-toolbar. Click the sideways M on that toolbar and add the imported data or demographic categories you require.

These workarounds listed above are presented as suggested alternatives to the tools Map Business Online designed to solve territory mapping problems. We highly recommend that map users stick with map layer territories for their obvious benefits:

Win a $20 Gift Card! Refer a business associate to Map Business Online in exchange for a $20 Amazon Gift Card!