Ah, the lowly county. Not as sexy as a ZIP code, not as awe-inspiring as a state – the county jurisdiction is a shy, unassuming administrative district. Still, business map users often ask about counties. And some aspects of county use in a business map can be tricky.

Unlike ZIP Codes, a relatively new invention from the 1960s, counties have been around for eons. The Norman Conquerors brought the term County to Merry Old England. Counties replaced the Saxon administrative district called the Shire. A county seat was often associated with a Count, who was the ruling figurehead of the county area, representing the king. A famous example of a county law enforcement agency would be the Sherriff of Nottinghamshire from the Adventures of Robin Hood.

In today’s Louisiana, counties are referred to as Parishes, a left-over from French rule before Napoleon sold the Louisiana purchase to the United States. Another county substitute name is the word borough. Borough can also mean city neighborhoods, such as those found in downtown Los Angeles.

There are 3,220 counties across the USA and therefore listed in MapBusinessOnline’s county map layer.

In MapBusinessOnline the importation of county data can be used to color-shade an area based on counties or to create territories. The most important thing to remember when importing counties is that a State column is required in your data. Unlike ZIP codes, counties are not uniquely named. If you look around the country you will find eighteen Montgomery Counties, seven Howard Counties, and surprisingly only five Smith Counties. So, it is important to always include a state abbreviation when importing a list of counties or searching for a county in the Search Bar.

Some users prefer territory maps based on counties as opposed to the more popular ZIP code based territory map. Counties can simply things from a territory perspective. Typically, counties are large enough to include more than a few ZIP codes. So, if minimizing overlap and providing larger areas for a sales rep to manage, is your goal, try using counties as your territory base map layer.

Because counties usually encompass a wider area than ZIP codes, counties may provide a more sensible territory balance basis. Population densities will tend to even out, where small ZIP codes, especially on the East coast, can be packed with people. Small ZIP codes with lots of population are tough to balance against large ZIPs bereft of people. Shifting your territory basis to counties may solve that problem.

Map Business Online does offer a filter option to view map layers by Primary County and Primary ZIP code. The reality is ZIP codes and counties do not always lineup perfectly. ZIP codes can overlap two or even three counties in places. Primary county views will provide a list of the ZIP codes with the majority of its land area dedicated to a particular county. This tool doesn’t come up often, but every once in a while, the Primary ZIP code and county options come in handy.

MapBusinessOnline offers a heat map button along the master toolbar. This map visualization will assign color density to a column of imported numeric data – like sales data or population characteristics. This view will display concentrated areas of sales activity, for example, like blotches of bright colors.

But often MapBusinessOnline customers who want to “heat map” means they want to color shade ZIP codes of Counties by their imported data, or perhaps by demographic data. Thus, a heat map can be a group of counties color-coded based on a column of data.

A simple and quick example is a Choropleth map showing county population estimates by County. 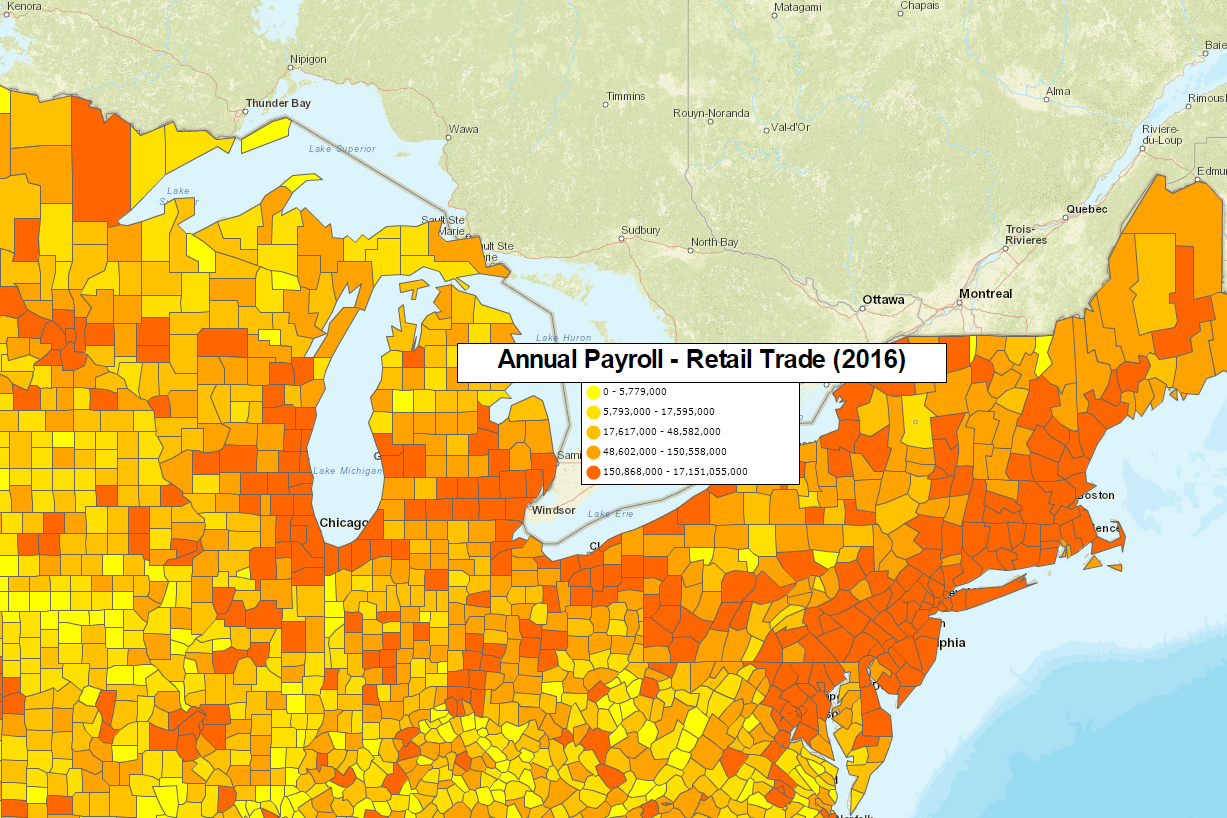 A simple map visualization might be a heat map as described above. But more advanced visualization can include multiple layers of information including customer locations, sales data, demographic makeup by administrative district, and even map notes.

Map visualizations are intended to inform a map viewer, typically a business audience, about business trends, concentrations of activity, and areas of responsibility. As opposed to analysis, these maps tend to show the big picture. They transmit a message that an audience can understand without a lot of detail. Example messages might be:

Map visualizations should be concise, representing one or two major points, and they should be relatively uncluttered with superfluous information. Do not use too many colors and data layers. Keep your map simple.

The use of counties in map visualizations helps to maintain a simple map structure. Counties cover a wider area than ZIP codes, which can get lost when viewed on a national scale. Counties still provide a relatively detailed distribution of demographic data, which can be too disseminated at a state level.

MapBusinessOnline includes a Data Window or tabular datasheet view. From this perspective, sales territory analysis and marketing lists can be developed for export. Demographic profiling by ZIP code or County can also be developed and exported for use outside of the application. This data analysis is accomplished largely through the application of the powerful More Data button in the lower right of the Data Window view. Read more about More Data.

The Data Window includes a filtering tool. A business mapping user can choose between counties, ZIP codes or other map districts to filter for demographic data or imported business data. Counties are helpful in such analysis.

One-way counties can be particularly helpful is when analyzing impacts across regional areas. For example, when hurricane mitigation efforts are reviewed or planned, the impact at landfall is typically most devastating in the cone area. ZIP codes would generally be too small to be effective as a gauge of impact, while counties might encompass an entire cone of impact. Either way, the demographic data is there for your analysis.

Are you using the MapBusinessOnline Desktop App for MAC or PC? It’s hipper than Instagram and it comes with your subscription. Impeach Adobe Flash Player!