Let’s Add a Territory Layer to a Business Map

A few weeks ago, we built a business map from scratch – see this blog.  This week I thought we might expand on that very same business map by adding a territory layer and sharing that sales territory map with our constituents.

For example, in MapBusinessOnline, the map creator can create a state-based territory map.  But to split a territory between two partial states, or one whole state and one section of another state, would require basing that territory on the County or ZIP code map alignment layer.

That’s a hard and fast rule in MapBusinessOnline – One map alignment layer per territory.

Keeping that rule in mind, you should be able to quickly determine which map alignment layer is best for your territory map.

In my map of brewery locations, I believe the sales opportunity for a brewery supply company is local. Therefore, I would build my brewery territory map based on ZIP codes. If I had more multi-branch brewery locations, I might consider counties as a map alignment layer. But there aren’t many breweries with multiple outlets in northern New England.

ZIP codes it is then. ZIP codes are a popular choice for sales territory maps.

Territory Maps for a Brewery Supplier

Breweries need lot’s of stuff to make beer. Our brewery supply company will offer a one-stop-shop for standard brewer supplies, which could include:

The overall northern New England region is our brewery supplier’s theater of operations. The company’s name is One-Stop Brewery Depot.  One-Stop has three salespeople on the road. The three territories are going to be named Maine Breweries by ZIP, New Hampshire, and Vermont.

But we’re also planning to hire a body for the Boston area to test the market. So we will also set up a trail territory there covering a list of specific ZIP codes.

Remember,  we have imported a USA breweries dataset that provides the brewery location points by latitude longitude, and all those records are geolocated correctly. But the address, city, and state columns had some issues. No matter. I cleaned up the columns on the states I required for my territories.  We’ll be using those brewery locations to help define our territories.

One fast way to create territories is by importing a spreadsheet. It is easy to create a spreadsheet for territory import.  As noted above, the map alignment layer is ZIP codes. For ZIP code territory, creation by import MapBusinessOnline requires two columns: Territory Name and ZIP Codes.

Let’s create an import spreadsheet for the trial sales area of Breweries around Boston. It’s a simple spreadsheet that looks like this:

With my spreadsheet saved, I click the MapBusinessOnline Create Territories button and find and import my spreadsheet.  In a few seconds, my first Boston territory is on the map.  However, I would like to fill in more ZIP codes, so I selected the Polygon Tool from the Search Tool list.

The Boston territory provides a reasonable territory starting point for a Boston trial. We can adjust it again later as necessary. 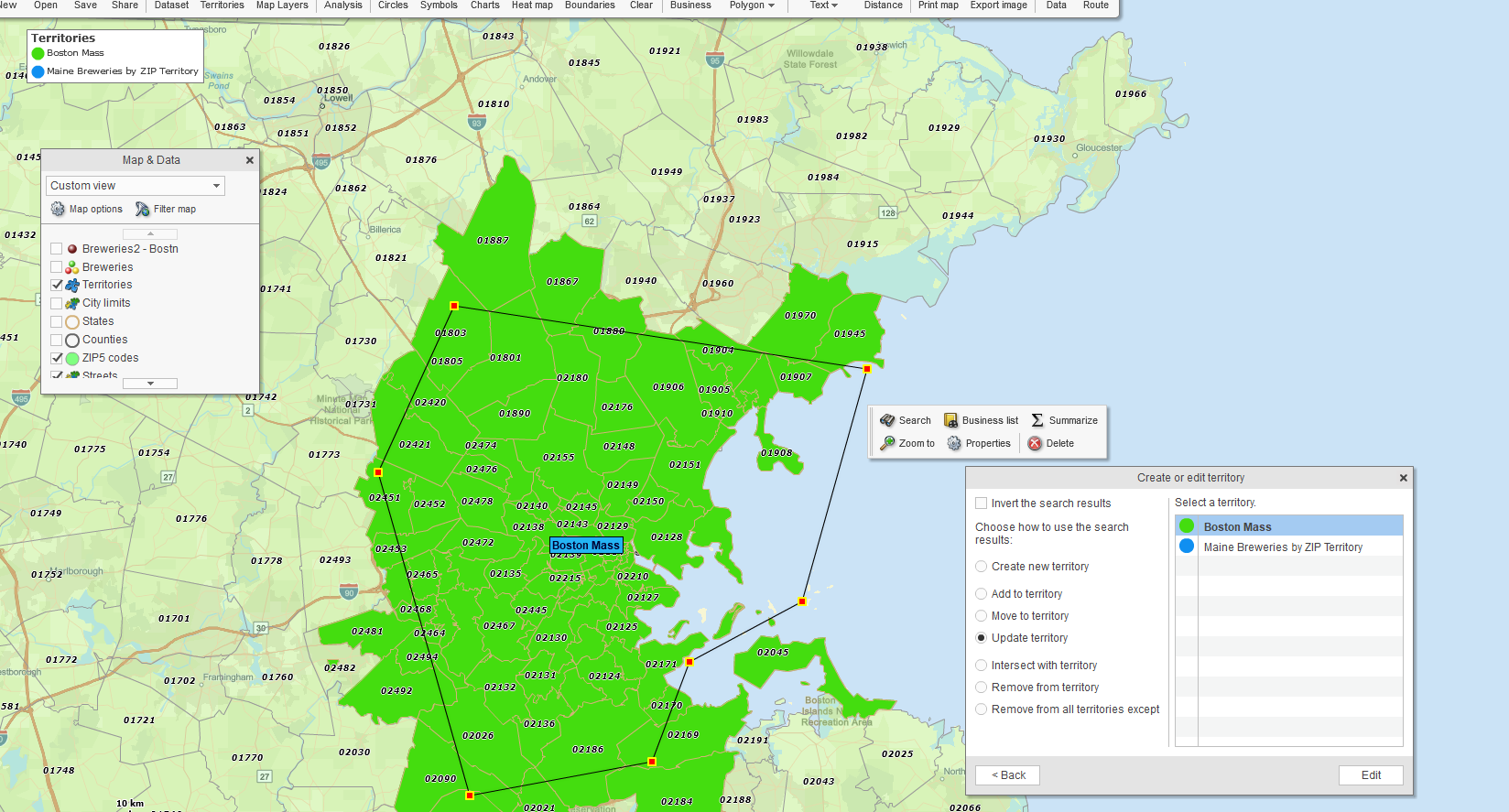 After any territory is made, it’s a good idea to review the territory for corrections and tweaks:

I created our Maine territory by filtering ZIP codes.  In Mass, Vermont, and New Hampshire, the breweries are evenly distributed across each state. Territory management can be statewide or city-focused. So, New Hampshire and Vermont are easy polygon search tool/lasso operations. Those territories are both completed in just a matter of seconds.

Do the same process for New Hampshire.

But in Maine, there are vast swaths of northern counties with no breweries to visit.  It makes sense to create territories in Maine by filtering the ZIP code list based on brewery presence.

I use the MapBusinessOnline Data Window view to filter the ZIP codes of interest for my Maine territory: 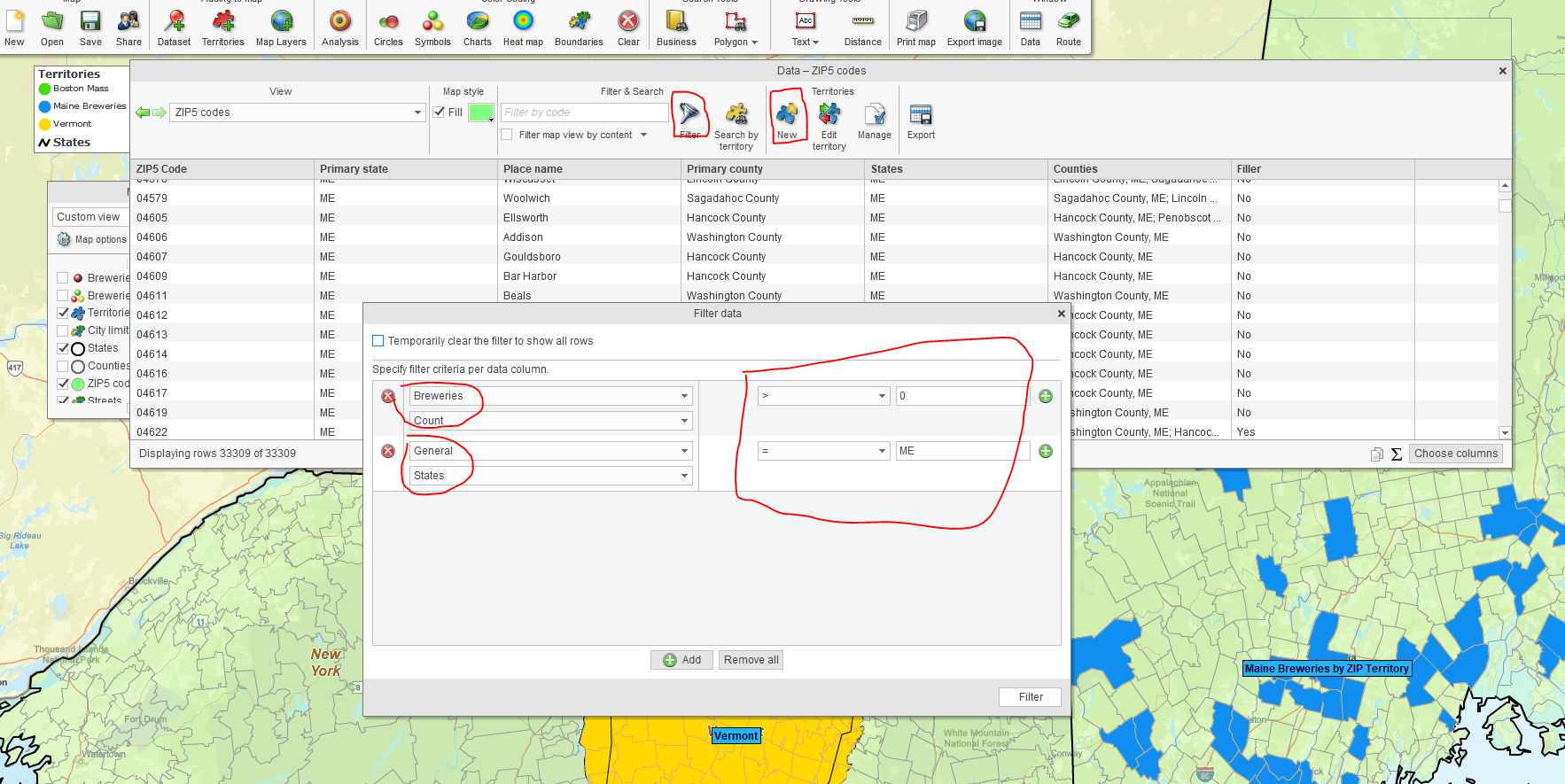 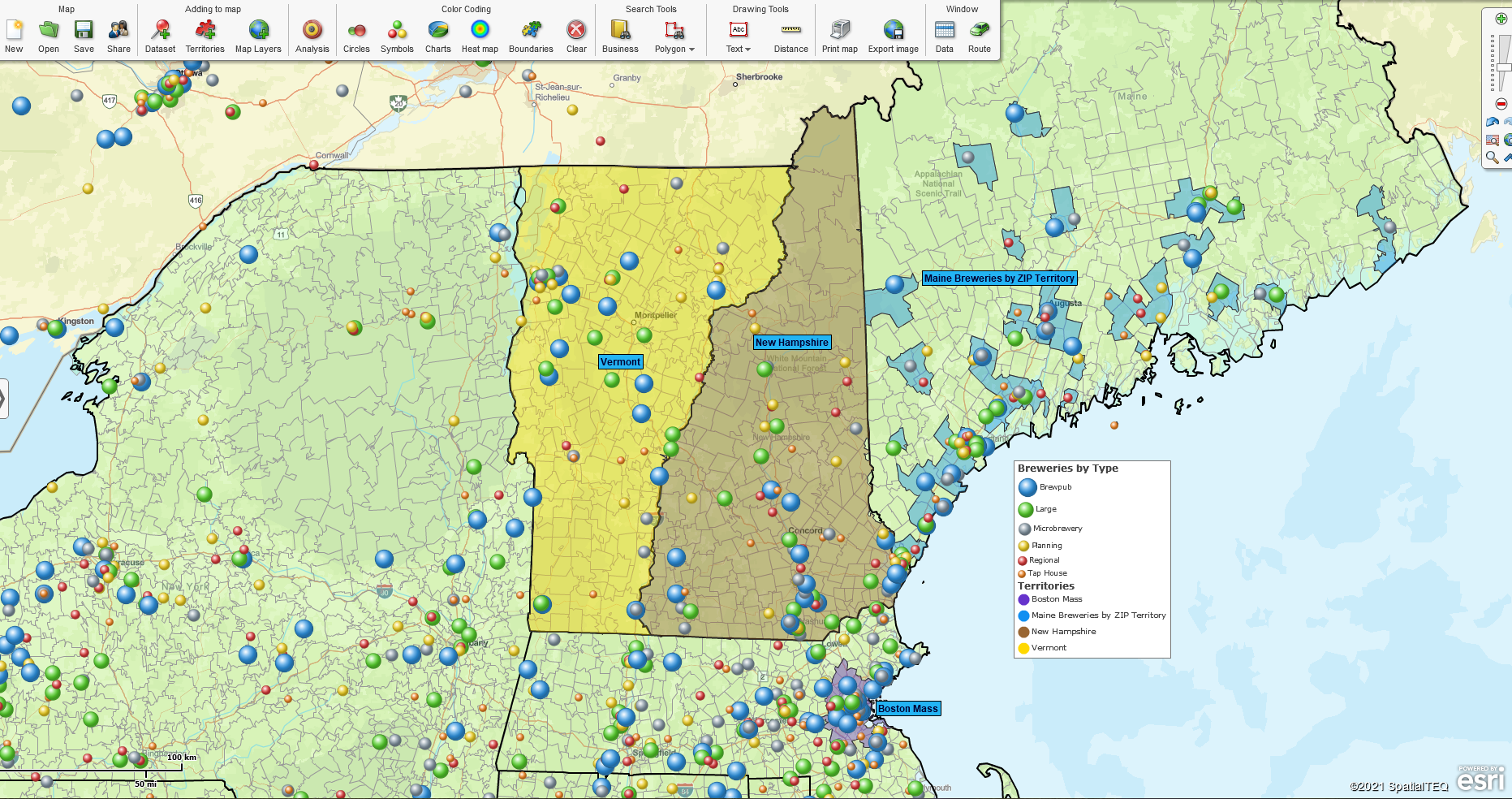 I now have four territories created for One-Stop Brewery Depot. One for each northern New England state, and a trial territory for Boston. One salesperson manages each territory.

This business example shows how MapBusinessOnline can provide flexible territory options for just about any business. Once the territory layers are added, and the map look and feel is optimized, a manager can publicly share their map with constituents using the Share Map button – four buttons in from the left along the master Toolbar.

Shared maps for view only purposes are Publicly shared maps, as opposed to Privately shared maps which are for MapBusinessOnline subscribers only.  Free map viewers must download the Map App first. Then they can click on a shared link and view the map we created.

Geoffrey Ives lives and works in southwestern Maine. He grew up in Rockport, MA and graduated from Colby College. Located in Maine since 1986, Geoff joined DeLorme Publishing in the late 1990's and has since logged twenty-five years in the geospatial software industry. In addition to business mapping, he enjoys playing classical & jazz piano, gardening, and taking walks in the Maine mountains with his Yorkshire Terrier named Skye.
View all posts by Geoffrey Ives →
This entry was posted in How to instruction and tagged Business mapping software, location intelligence, online mapping software, sales territory mapping, Shared maps, ZIP code mapping. Bookmark the permalink.