Online Maps Will Help You Reach Your Mountain Top

I live in Cornish, ME adjacent to the largest area of undeveloped land in York County, Maine. Two 1,320-foot mountains sit side-by-side about 1-1/2 miles behind my house. When we first moved to the area you could easily access these beautiful mountains by hiking up along public dirt roads. But since that time, all of those roads have become no-trespassing areas. One access road is defended by a Second Amendment fanatic, making the forbidden passage somewhat hair-raising.

Still, those mountain summits beckon. They provide amazing views of the surrounding area with vistas of Southern Maine and the White Mountains of New Hampshire, including Mount Washington. Now that the kids are grown and I have a little more weekend time and the need to exercise, I committed to discovering a new path to reach those mountains outback; one that didn’t require a bulletproof vest.

Decent maps were an essential part of achieving my goal. I consulted many maps including:

Most of these maps were not business maps but I don’t limit all of my map use to market analysis and sales territory mapping.  Not all online maps are a MapPoint replacement. (And low, he pays tribute to the Google SEO Gods.) Moving on.

Last summer I took a series of hikes from my house back into the woods, attempting to get around Clark Mountain to climb Hosac Mountain, the highest peak with a clear 360° view. To be clear, I could simply drive a few miles, park my car and walk into the Sawyer Mountain preserve, right up to Hosac Mountain. But I wanted to walk up to those mountain tops from my backdoor with no assist from a vehicle. You get it, right? No fossil fuel expended for my weekend excursions, litter picked up along the way, walking the whole distance commando, and other radical far-left rituals.

Just me, the woods, and ten thousand tics.

But last summers hikes didn’t reveal an efficient hike up the mountain. I had an efficient start, but I needed to get around Clark Mountain, and find a path to Old Sawyer Mountain Road. That was the key.

Clark Mountain stands between my house and Hosac Mountain. Almost identical in height, Hosac is cleared on top providing astounding views of Southern Maine and the White Mountains of New Hampshire.  Clark Mountain has a few nice overlook spots, but it is quite wooded, and it is gated-off to prevent interloper access. Clark does block the view of Mount Washington from the top of Hosac, but with all the hills around my house, I see Mount Washington more than I see my wife.

The first-quarter mile hike, up the requisite rise in elevation to reach these hills, takes place on town roads, mainly Mountain Road in Cornish. This half-hour hike is a wonderful walk I hike often in the mornings before work. Although it’s only a quarter-mile hike up to a lookout, you get wonderful views of Mount Washington and Western Maine’s Pleasant Mountain. 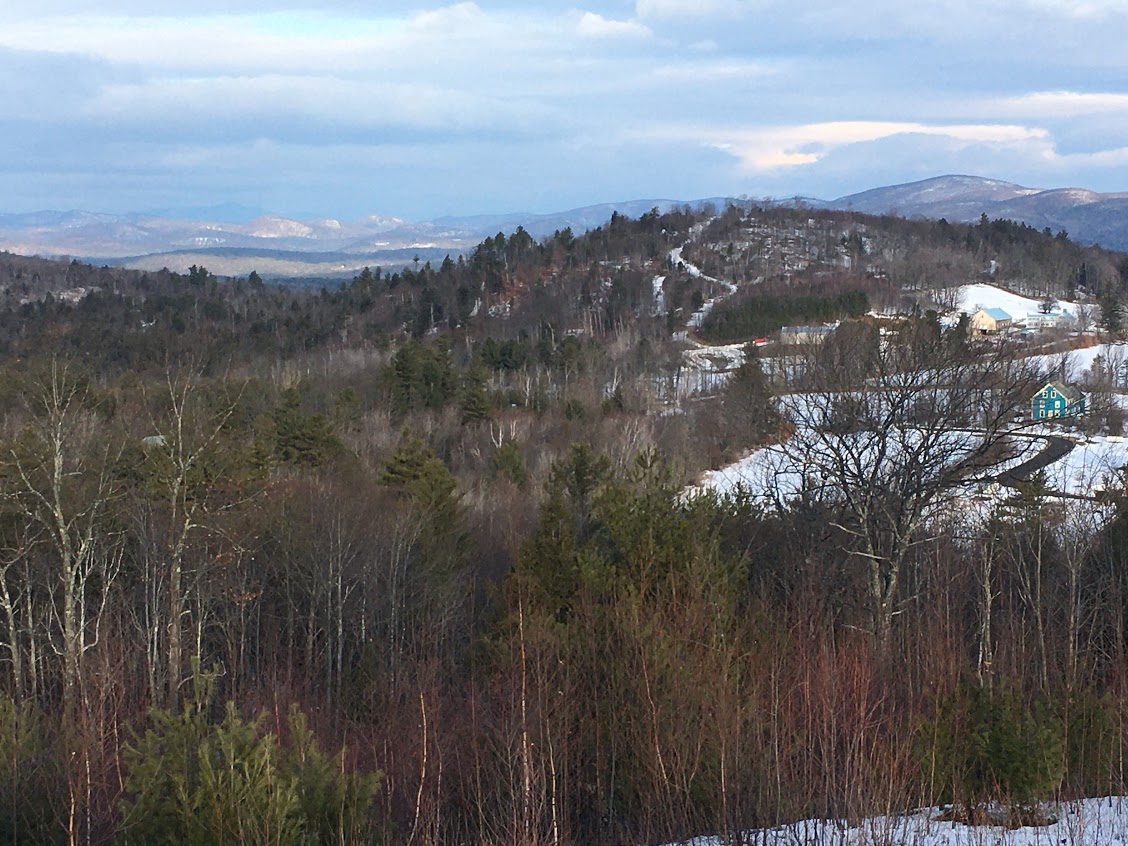 To hike the full Hosac Mountain loop from that abbreviated hike up Mountain Road I follow an old hunting and RV trail that leaves the maintained road to the south. Late last February I followed this trail into the woods.  The path leads directly to the base of Clark Mountain and follows the mountain base’s west side for about a half a mile.

Taking this trail in February was unusual for a Maine winter.  The snowpack was quickly disappearing due to an early spring thaw. In the mid-morning winter sun, the ground and snow remained frozen, so I was able to walk normally without a lot of mud and wetness in my boots. There were no signs of snowmobiles on the trail.

As the trail moved south the ascent was gradual until my cell phone altitude app told me I was  approaching 1100 feet, the highest point before descending again and approaching Hosac, my goal. I saw no animals in the vicinity on that day, but there was plenty of deer sign and moose scat at one point. I stumbled across the remains of a blue jay ripped to shreds by a wild cat or a coyote. The wind blew silently through the trees and my neck got a chill as I stared at the bright blue feathers frozen into the top layer of snow.

My take-away from this delicate moment was that sometimes it sucks to be a blue jay. No wonder they make such a racket.

Last summer when I came this way I stuck with the trail as my altitude declined on the far side of the mountain.  But my dogged trust in my sense of direction led me into swampy areas. At the time I moved to the north to avoid the muck and mire and only found more of the same. I got lost, I fell, and I got wet, and that was on a nice summer day. I eventually reached the Old Sawyer Mountain Road, long since discontinued. And from there I did summit Hosac, but the entire hike was ugly and would not serve as an efficient and comfortable hike for an aging, whiney, baby boomer. 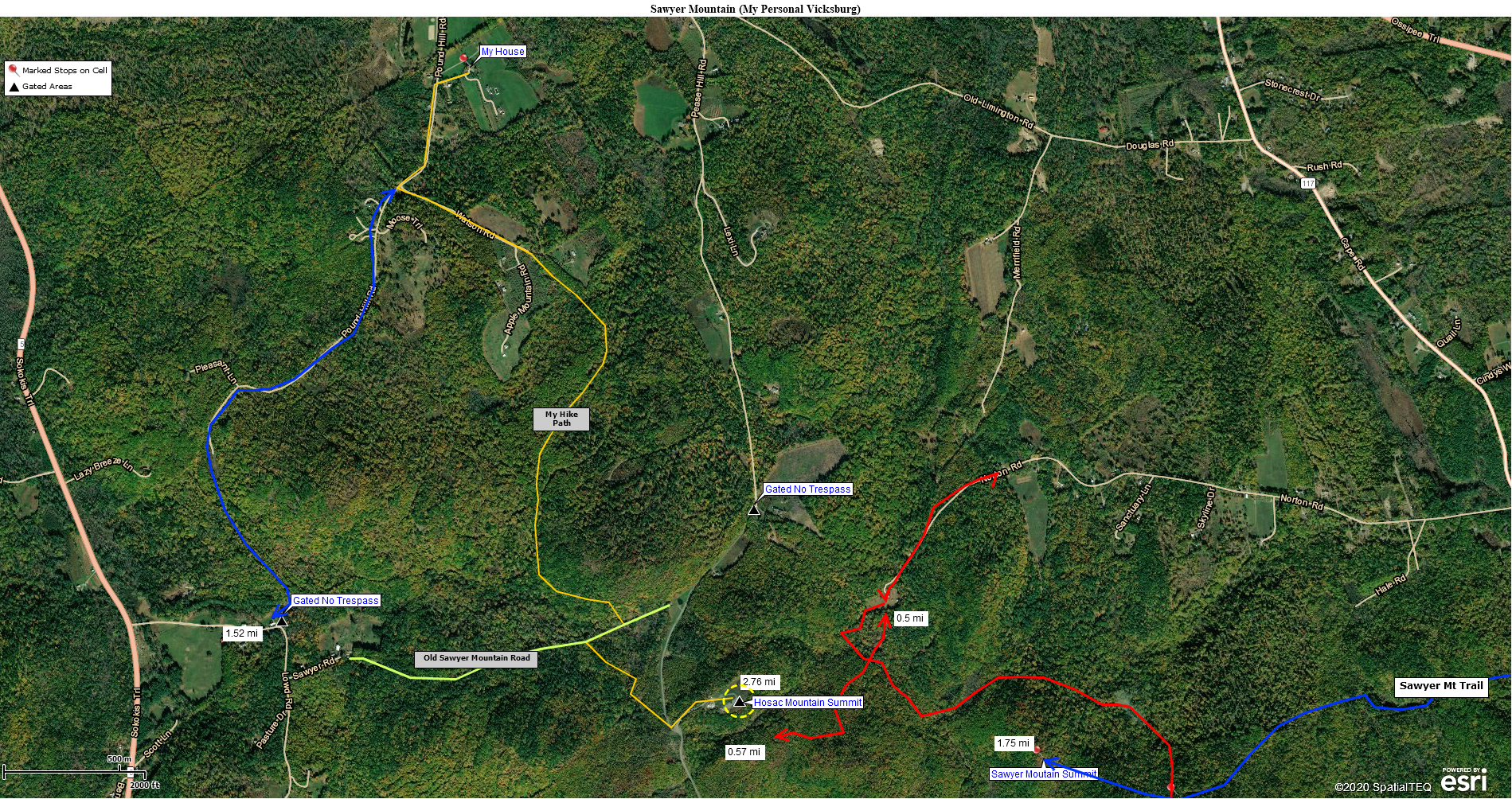 A MapBusinessOnline view of my backyard mountains

I want to be able to bring visiting friends up to these scenic vistas. I’m not going for Jeremiah Johnson in a blizzard, warmed in the cabin by the near-dead pioneer widow Baxter. No way. I’m going more for recently retired yuppie takes a two-hour walk on a beautiful summer day and naps when he gets home. No cabin-bound, practically frozen widows involved.

So, on my winter’s day hike, when I reached the end of the marked trail, this time I turned to the east. I made this turn, based on a topographic trail map I found online in December, one of perhaps fifty maps I perused while researching this hike. You can also find Topographic Maps in MapBusinessOnline.   This particular map indicated a 900-foot contour line at the base of Clark Mountain once I reached the southern side.  It showed that contour line follows the mountain base around to the east and then takes a hairpin turn back to the west, leaving the wet area below that 900-foot ridgeline in the crotch of that hairpin turn.

Contour lines are noted on classic topographic maps. Each line represents the contour of the landscape based on its elevation about sea-level. 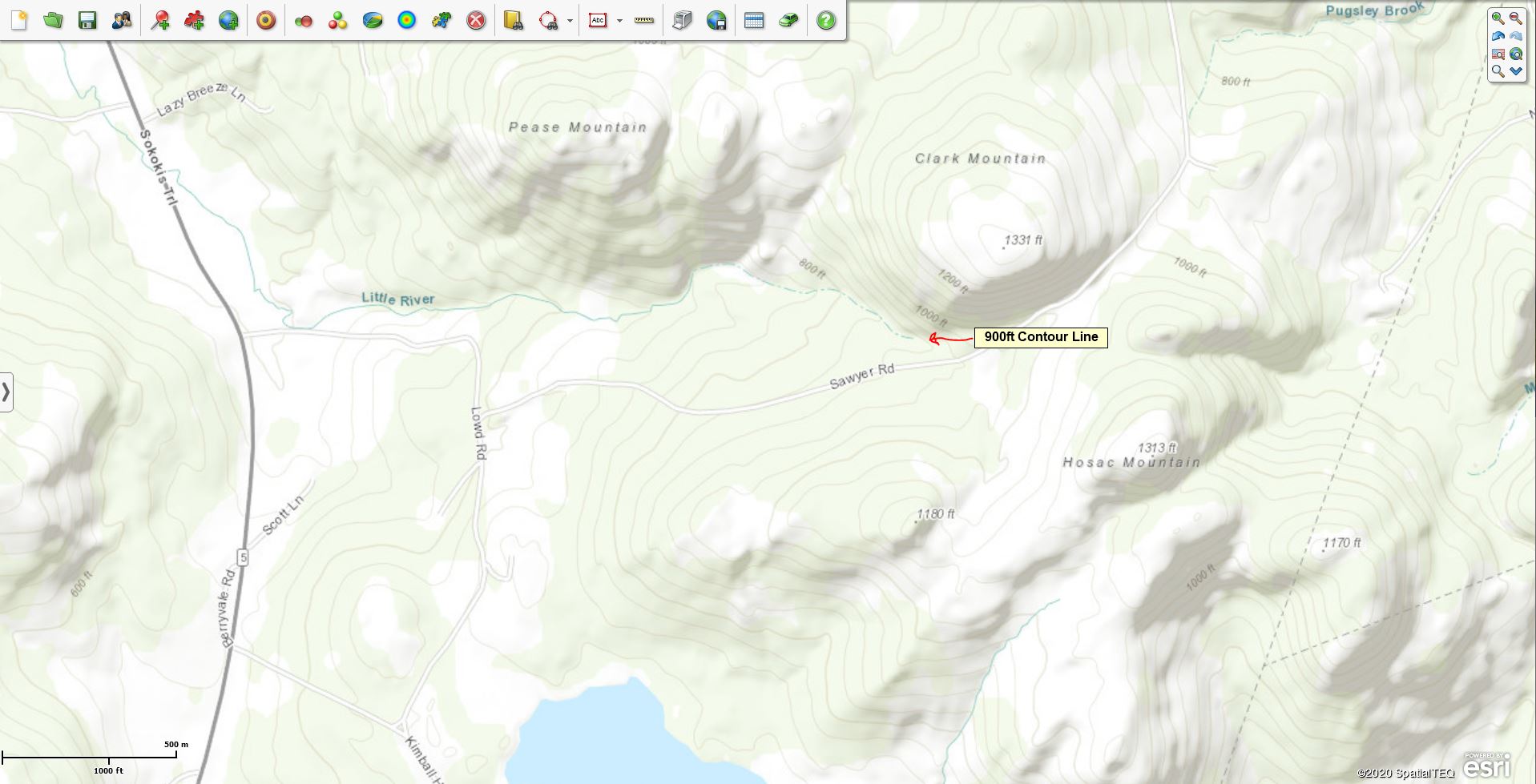 I knew from looking at all the maps I consulted, that this contour line was my answer. When my position on the far side of the trail had declined to 900-feet on my cell phone altitude app, I moved east. By now I could see and hear that the wetland I’d encountered last summer was fed by a rushing brook quite alive with snowmelt. On some of the old maps that brook is called Little River.

As I moved east there was no longer a path.  The terrain was steep and shaded by a thick stand of pines. The ground here is rocky and muddy with little vegetative cover. But with the help of a long thick maple walking stick, I was able to maintain my balance and avoid an embarrassing call to my wife begging for the rescue squad. I pushed on, gradually making my way down to the Little River.

I then followed the brook east and upstream for maybe a hundred and fifty yards. The stream was quite beautiful in the hazy morning sun. I carefully selected a crossing point where several boulders and a log seemed to guarantee that my boots would remain dry. These Little River stones lived up to their promise and  helped me across the rushing stream, no worse for wear.  I then spent an hour wandering around on the other side of the wetland looking for the Old Sawyer Mountain Road by dead reckoning with no luck.

I got tired quickly, it being the first walk of the season and having not eaten before I left home (like an idiot.) I decided I should return to the brook and pick-up the map’s contour scheme again. In doing this I found Old Sawyer Mountain Road within five minutes. #Maps are great.

Old Sawyer Mountain Road once provided passage for horses and carriages. Its use was stopped before 1930. But the road now serves as a wonderful walking trail deep in the Sawyer Mountain woods. Covered by tree canopy, the road is pretty much a straight-line turnpike from Clark Mountain in Cornish to Lowd Road, in Limerick. It’s about fifteen feet wide and bordered by stone walls on each side.  There are old home foundations and cemeteries along the road. The obsolete road is now a mountain path, rutted and muddy in many areas, but in summer it softens and offers a bed of dry leaves upon which to enjoy a shaded hike on a hot summer day. If you can find the freaking thing.

As it turns out, the brook crosses Old Sawyer Mountain Road just a quarter-mile east from where I left the hunting trail and began my bushwhacking excursion. Huzzah!

My turn-by-turn directions would be these: Turn right off of Mountain Road, follow the Clark Mountain hunting trail south, then follow the Little River East until you reach Old Sawyer Mountain Road.  Follow Sawyer Mountain Road east for about 20 yards and take a right onto a wide trail sloping up that leads to Hosac Mountain. That trail will T onto another trail. Bear right at the T to access the incredibly steep Hosac Peak access road. You’ll see the tall cell tower as you approach the mountain top from the woods.

Once a hiker reaches Hosac Mountain there are frequently used trails in several directions that lead to Sawyer Mountain and the Francis Small Heritage Trust trail system. There are also roads leading to the towns of Limerick and Limington, Maine from Hosac Mountain. A hiker could spend weeks walking the trails back there and see very few humans. 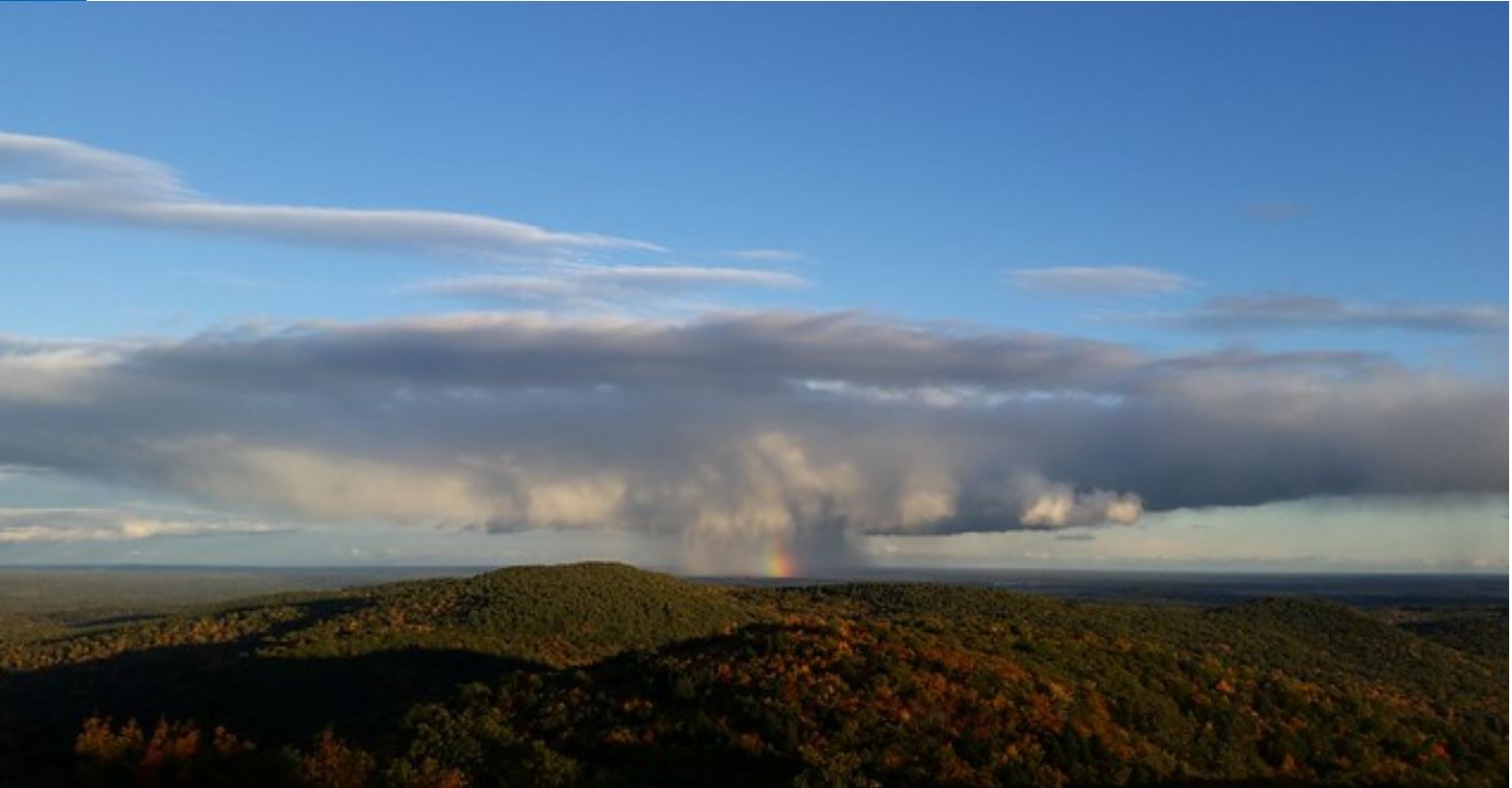 A rainbow viewed from the Hosac Summit

My goal had been achieved. The critical element of my success was studying the various maps of the area. The maps varied quite dramatically from each other.  Specifically, the actual position of Old Sawyer Mountain Road varies from map to map.  Many show the old road moving right over the top of Clark Mountain, an unrealistic placement based on the old road’s original purpose – basic horse drawn transportation between remote homes on the heights and the town. It made much more sense for the road to circumnavigate the base of Clark Mountain where maintenance and passage of horse-drawn carriages would be easier, especially during winter.

The map that most accurately depicted the obsolete road was the Town of Cornish tax map. But you just don’t think to review a tax map to find an accurate hiking path.  Hikers should consider consulting tax maps for old trail verifications. Follow the money.

My point, overall here, in addition to hiking as a great pastime and source of good clean fun, is that digital maps, studied carefully can provide navigation solutions to backwoods trail use. No surprise, I guess. But these geographic sources are all there online for free and can be a fun and productive way to pretend you’re Davy Crockett or a near-dead widow in the wilderness, without becoming one.

Just be sure to bring your cell phone and some water.

Are you using the MapBusinessOnline Desktop App for MAC or PC? It’s hipper than Instagram and it comes with your subscription. Dump Adobe Flash Player!

This entry was posted in A story, Business Mapping Software blog post and tagged Business mapping software, Maps for hiking, Walking in the woods. Bookmark the permalink.