Not everyone is born able to create territory maps. Some of us need a little guidance here and there. MapBusinessOnline is a map creation toolkit for businesses of all industry types. Our cloud-based map maker tool is easy-to-learn and even fun for businesspeople who require map visualizations to supplement their business work.

First-time business mapping users should take some time to think about your territory requirements. Read about preparing for sales territory mapping here.

Map Alignment Layer – Give some thought to your map alignment layer. Will your territories be based on States, Counties, ZIP5 Codes, City Limits, or Census Tracts?  Read more about map alignment layers and territory considerations here.

Territory Creation by Polygon vs. Data Import – If you are brand new to business mapping, consider using the Polygon Search Tool to create your territory map. This basic tried and true method gathers ZIP Codes or Counties by lassoing them with a polygon draw tool. You’ll pick up on this process quickly. Collecting territories with a polygon tool gives the user a basic understanding of how to create a map.  For more on territory map creation, read this article.

Lassoing territories is easy. Ensure your map alignment layer of choice is turned on (ZIP code, County, State, etc.) Then click the polygon tool and run that line through the ZIP codes. Every ZIP code your drawn line touches will be included in your territory. Once the line returns to the starting point, the alignment map layer list is presented for selection. Save your territory with a name. Move on to the next territory. 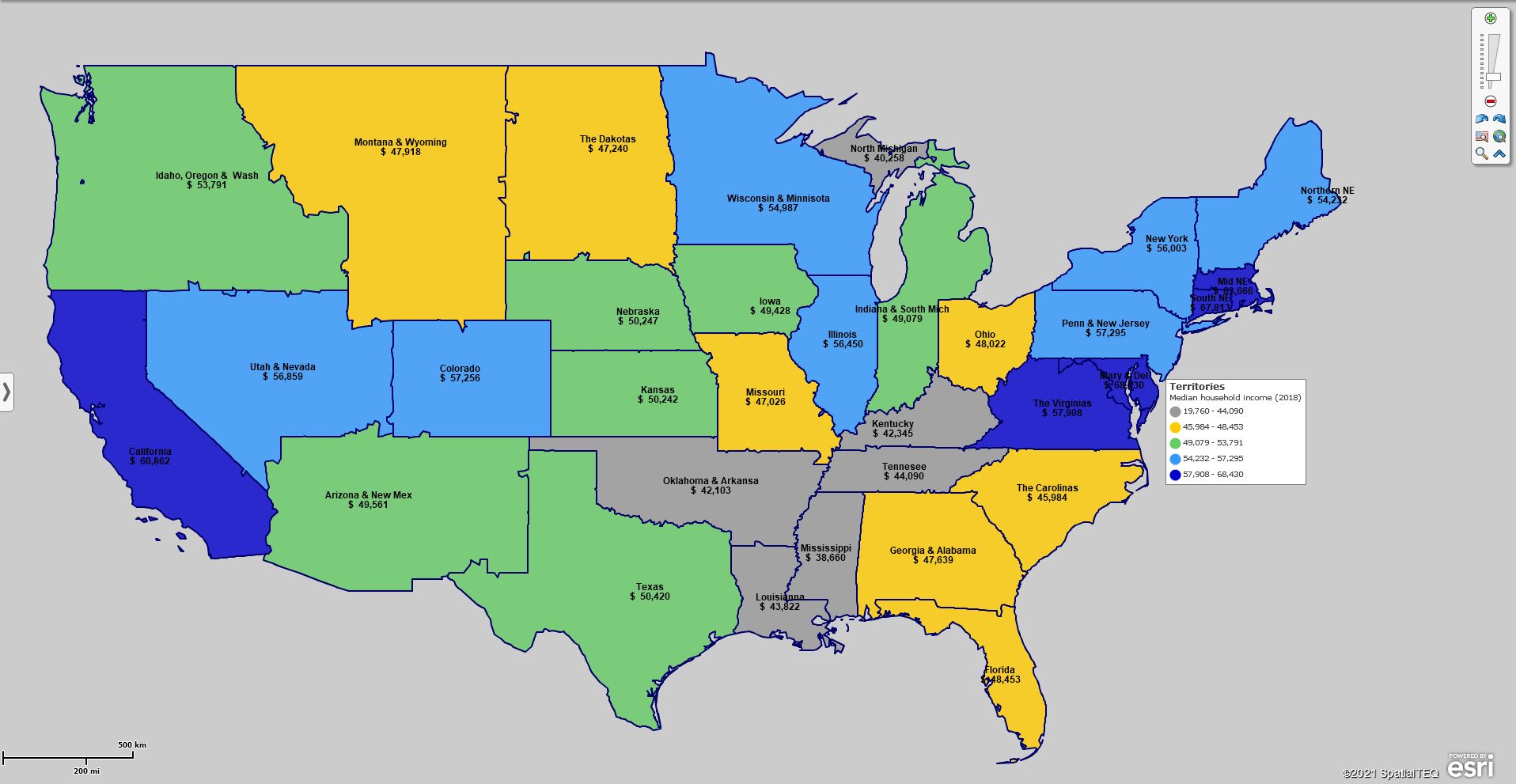 Alternatively, users can select individual map layer units, like ZIP codes, with their mouse cursor. Select the first layer unit, hold down the shift key and select as many more as you like. Save as noted above.

Importing Territories from a Spreadsheet – Another method for creating territories is through spreadsheet import.  A ZIP code-based territory spreadsheet should include a Column for name, ZIP code, and columns for what other additional datasets your business may require.

A county-based territory spreadsheet must include a column for state. County names across the United States are not unique. For example, Montgomery County occurs in three states. MapBusinessOnline won’t know what to do with just Montgomery County. It needs a state, or its day is ruined.

The create Territories button is on the Master Tool Bar under the Adding to Map section. That’s the button to use to import territories. Keep in mind you can repeat the process of importing territories into the same map, but if you do your imported layers will show as multiple layers in Map and Data and the Data Window. Beware of accidental or deliberate territory overlap. See the Overlap section below.

Gathering all the territories you can in one territory spreadsheet is more efficient. Adding territories to your territory map can also be achieved by lassoing or incremental unit selection.

One Map Alignment Layer per Territory

A business map user can only apply one map alignment layer per territory. For example, a single territory can be made up of ZIP codes or Counties, but not ZIP and Counties. If, for instance, a user desires to add a territory that is a state section to a State-based territory map, then the territory with the segment of a state must be based on Counties or ZIP codes.

Editing Territories in MapBusinessOnline is easy. Select any map layer unit, and click the Edit Territory Puzzle Piece icon in the mini-toolbar. Next, choose from the  operations menu.  You’ll see these operation options:

Remove from all territories except

Once the operation is selected, the user chooses which territory to edit. Read more about editing maps in MapBusinessOnline.

The reason a company might decide to build territories by map object could be due to travel impediments. Highways and rivers can create hard-to-reach areas that make it more efficient for a sales-rep from another location to cover.

MapBusinessOnline accommodates these oddball territory requirements using the Draw Tools. Territory areas will be manually constructed using a Polygon tool or a Line tool. The territories will not include an analysis datasheet view. We recommend using the previously noted Map Alignment Layer method for territory creations. But if you must use the draw tools to create territories, read more here.

My Territory Labels Disappeared – Hold down the shift key and click the territory. The Shift Click brings the Label back after removal.  You can also Edit Map Layer Properties in Map and Data. Under Labels, click Add All Labels to the map.

Can’t Select ZIP Code or County to Create or Edit Territory – Make sure no filter exists on the territory layer. In Map and Data, edit the properties of the Territory Layer. Under General, make sure Map View Filter reads: None.  If there is a CLEAR button noted, click the clear button to remove the filter.

Incremental Territory Selection – Make sure the target map alignment layer has Fill checked on. Map Objects must have a fill to be selected for a territory.

How to configure drive time-based territories

Territory mapping may not be instinctual you, my friend, can learn to be a map geek.